The singer-songwriter’s film asks, “What happened at the veterans’ home?” 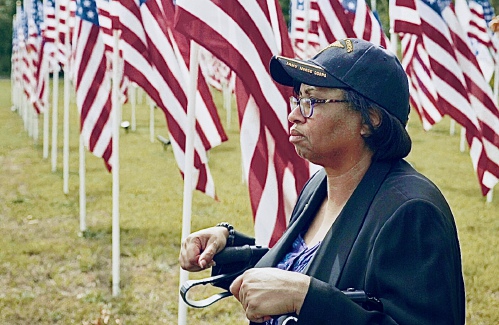 Laura Wetzler has made a living for years as a musician: a singer-songwriter who performs both her own songs and a wide range of other music, from traditional Jewish-Spanish and Yiddish songs to Broadway classics in passing through the air for children.

While on tour, she also offered workshops and lectures on topics such as the history of Jewish and American music and entertainment. Before the pandemic, she usually gave 150 concerts and conferences a year.

But when COVID-19 arrived and shut down nearly all live musical performance, Wetzler turned to film — and not just to keep busy artistically.

Like many Americans, Wetzlerwho lives in Cummington, was horrified in the spring of 2020 to read of widespread COVID deaths among residents of veterans homes and other facilities providing care for the elderly – including the Soldiers’ Home in Holyoke.

That’s exactly what she did with “What happened at the veterans’ home?” an indie drama she wrote and directed and put together on a shoestring budget. Now, after winning numerous awards at film festivals starting last fall, the film makes its regional debut on March 20 at Northampton’s music academy.

Wetzler says she often sang and played her guitar in nursing homes and other establishments. In that sense, the news about COVID deaths among these elderly residents felt very personal to her, something she felt she had to come to terms with.

“I was upset by the statistics [on deaths],” she said. “Beyond their horror, it was easy to forget that there were real people, real lives behind those numbers.”

“I just started hearing some of these voices and started writing them out as monologue series,” she said.

Its story is built around three main characters: Gloria Michaels, a disabled former Army nurse now in a veterans’ home; Gloria’s daughter, Gwen Michaels, a hospital nurse increasingly overwhelmed by COVID-infected patients; and Mary Emmett, a certified nursing assistant who speaks out against inadequate security protocols at the veterans home.

There’s a sort of fourth character, a kind of “mischievous con man”, as Wetzler puts it, who takes on the personality of the COVID virus itself, bringing a seriocomic element to the story.

“I didn’t want it to be just a collection of terrible stories of loss and grief,” Wetzler said. “I wanted to get other perspectives and take a look at a wide range of questions.”

Indeed, “What happened at the veterans’ home?” tackles not only the onslaught of COVID, but also the low wages of many aged care facility workers; the burnout that the pandemic has produced among healthcare workers; and the financial shortcuts and mismanagement of some facilities that have resulted in equipment and staff shortages, as well as inadequate care.

“I think one of the things I’m trying to say with this movie is that we all need to take better care of each other,” Wetzler said.

Wetzler said she originally wrote “What happened at the veterans home?” as a play (she studied acting before and is also a poet). But given the restrictions placed on live-action drama by COVID, a movie seemed a more likely medium to showcase his story.

How, though? Basically, Wetzler says, “I read everything I could about the process of making a movie, and then I learned from every person I worked with.” Being able to tap into the artistic depth of the region has been a big help, she notes.

Robin Budulis, a percussionist who played with Wetzler for years, takes on the role of the COVID virus. Jared Slonick, from Agawam, served as editor and cinematographer on the film, and Rikk Desgres of Northampton’s Pinehurst Picture & Sound handled post-production sound and color work.

Due to COVID restrictions, Wetzler wrote nearly all of the scenes as sets for the individual actors, who speak directly to the camera from various settings across the valley, indoors and outdoors.

“It wasn’t safe to have two people in a room together,” Wetzler said, “but we were able to do a few scenes outside with social distancing.”

All of the rehearsals, she says, were actually done on Zoom in August 2020, and the footage was shot over eight days in September. Editing and other post-production work took place online.

These mostly solo scenes help to reinforce the sense of isolation produced by COVID. They also serve to give the film, which is around 50 minutes long, a bit of a documentary feel, in which the actors’ ability to channel a range of emotions – anger, disbelief, grief, fear and determination – directly to the camera carries the story.

There’s also room for a bit of gritty humor, like when Gloria, sitting in some nondescript room at the fictional Veterans Center, says, “That’s not what I had in mind for my golden years… . Don’t get me wrong, there are a lot of nice people working here. But they pay them for crap.

A more restrained scene finds Gwen sitting at the bottom of a flight of stairs in her hospital, still wearing her scrubs. She takes off her face mask and speaks in a shaky voice about how caring for COVID patients has physically and emotionally drained her.

“I’ve been a nurse for 15 years and I’ve never seen people so sick,” she says.

She also fears for Gloria, having been unable to find out how her mother is doing at the veterans home, and she is upset that due to the danger posed by the virus, she cannot provide the close emotional support. to which she is accustomed. give to the sick.

“I want to give so much more,” says Gwen.

The film reflects what was known about COVID in mid-2020. There are scenes, for example, where the characters express their hopes that the crisis will spur the creation of a vaccine as well as a national resolve to improve healthcare for the elderly. Wetzler says she could not imagine at that time how politically and socially divisive the virus and security protocols would become.

The film is also a labor of love. Wetzler won’t reveal how much it cost to make, but she says it was “a fraction” of what a typical film of comparable length would shoot. She financed it herself, she says, “because I wanted the people who worked there to be paid.”

She hopes it will remind viewers of the vital role healthcare workers play in helping the elderly and the sacrifices veterans have made to serve the country. “They all deserve better,” she said.

A portion of all ticket sales at the Academy screening, which takes place March 20 at 2 p.m., will go to veterans organizations WESOLDIERON.org in Leeds and NABMW.org (the latter stands for National Association of Black Military Woman, which was a research source for Wetzler’s film). A Q&A with Wetzler, Keel, Joyner and Vielehr will follow the screening.

Wetzler is thrilled that her film has been well received; it will be screened in April at the Boston International Film Festival and the Massachusetts Independent Film Festival. But looking back, she said with a laugh, “I’m not sure I would have done this if I had known how much work it would entail.”

Information on COVID protocols at the Academy of Music can be found at aomtheatre.com.

Steve Pfarrer can be contacted at [email protected]