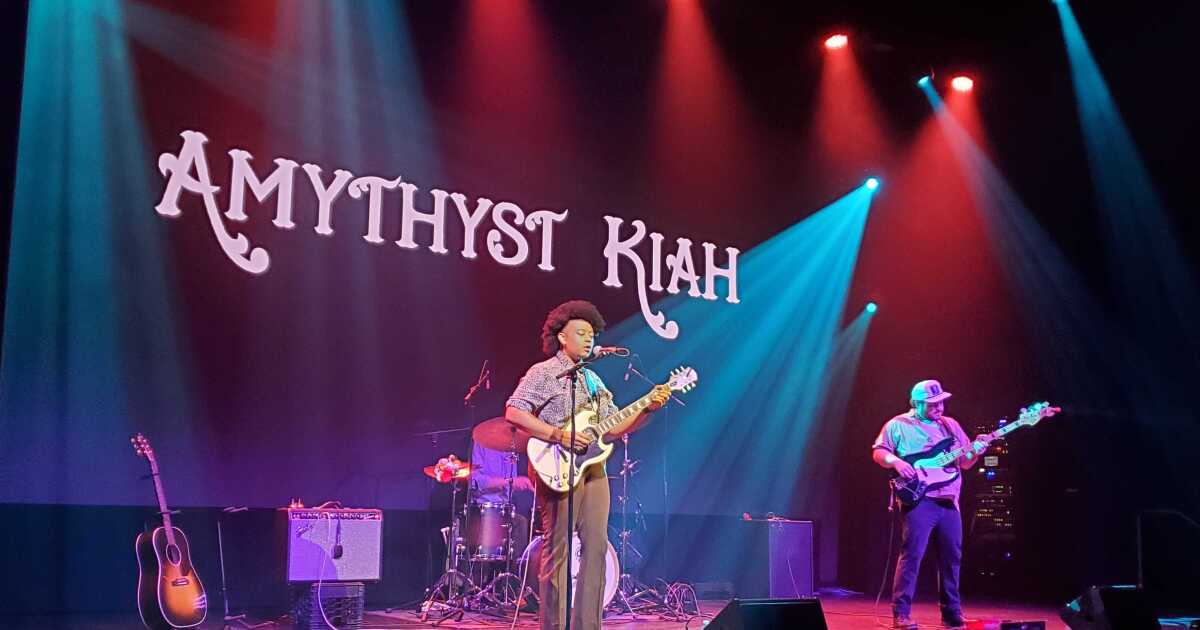 Set singer-songwriter sound Kiah amythyst is tricky. Hailing from Chattanooga, Tennessee, his work draws on influences ranging from picking the banjo in Appalachia to the alternative rock stars of his youth.

You may know some of Kiah’s music from her work in the supergroup Our Native Daughters., with Rhinannon Giddens. His song “black myselfwas nominated for Best American Roots Song of 2020, and she recently completed a tour opening for The Who.

Kiah’s latest EP is called pensive popand it comes out on August 12. She will perform in Portland at Thompson Point this Saturday.

Earlier this summer, Amythyst Kiah stopped by NHPR’s Studio D to chat with host Rick Ganley about her genre music and how she defines her sound. Below is a transcript of parts of their conversation:

Amythyst Kiah: I think first and foremost I see myself as a singer and songwriter, and I love playing guitar. I love writing guitar songs. It’s kind of – for me, it’s the base. And the next step is really to allow the music to come and go without attaching any particular identity to it…which isn’t always the easiest thing to do.

Rick Ganley: Has recording and playing with other artists, including Rhiannon Giddens, changed the way you play?

Kiah: Honestly, it was a dream come true because the Carolina Chocolate Drops were a big influence for me, like really, really wanting to keep digging into early music.

It was great to be able to open for her and be asked to be part of Our Native Daughters because it’s such a beautiful project. [The experience] really helped connect all the dots for me in terms of who I am as a musician and a human and the kind of, you know, lineage and heritage that I’m part of as an American musician.

Thinking about the things that my father, and my grandparents, and my great-grandparents, and all the people before me… who had to deal with the transatlantic slave trade, and then had to deal with the segregation, and going through the civil rights movement in the sixties. And just all those people who paved the way for the right to just live as a human and be considered human. And having all of that experience to myself just helped me further solidify, like, my identity and my place in the larger scheme of history, if you will.

Ganley: I saw you play here at Concord, and you did a few covers. For example, you covered Tori Amos and Joy Division, fantastic version of “Love Will Tear Us Apart”, by the way. I love this arrangement. But also Songs by Green Day, of course, and the Carter family. It was your reminder! How do you decide what to cover?

Kiah: The reason I could never be a professional wedding singer is that I literally can’t bring myself to sing songs unless they resonate with me emotionally and also retain the integrity of the song.

Ganley: You are in the middle of a long tour in the United States. I know you’re heading to Europe. What was it like being on the road compared to the last time you were on tour?

Kiah: Getting used to traveling again. I hadn’t realized how physically stressful traveling was because I was just doing it, and I didn’t really have a comparison. And so you had to like knocking off the rust. And because of the way The Who dates were set up and because of the west coast shows…we were flying like every other day.

But I would do it again in a heartbeat because it was The Who, and I would do it again. But like, I think to myself, it’s not at all healthy to do that. So we got attached and just, you know, we got away with it. And again, the shows are what made it all worth it, you know?

Ganley: So tell me about that. The adrenaline rush of being, I mean, obviously The Who…you play arenas. How is?

Kiah: The arenas are so big! [Laughing]

They are so big. Not even just… but like behind the scenes. I feel like in the end, you walk at least three miles.

Ganley: Keep thinking about that scene from Spinal Tap where they’re under the stage, and they’re just trying to get through the maze, you know, trying to find the stairs.

Kiah: [Laughing] Yeah. Honestly, I want to see this movie again because I’m going to have a whole new appreciation for it. It was crazy. Even now it’s still a bit wild. And then like Pete…

Kiah: Yeah yeah [Laughing]. First name basis. Yeah. Peter. No, but he contacted my management because he had seen me perform on Jimmy Kimmel and just wanted to see if we were available for shows. So it was like Pete Townsend personally asked him to play to open for them, it was like… what?!

Ganley: This call comes in, you’re like, let me think about – Yeah, yeah, we’ll go on that tour.

Kiah: It’s like, whatever. And if I did something else, it’s canceled! Like it’s, you know, like, we’re gonna make it happen. So. So, yeah, it was a really wonderful experience. It was great.