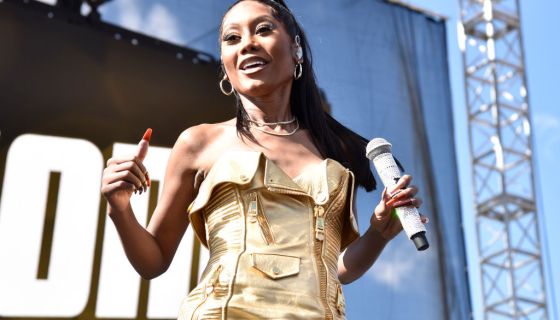 Singer and songwriter Muni Long is finally getting her flowers after years of success for a heavy list of music industry celebrities.

The 33-year-old star took social media by storm last year with her hit ‘Hrs and Hrs’ flooding a number of user videos on TikTok and Instagram with the sultry smash. Eventually, the R&B anthem landed on the airwaves, skyrocketing to number No. 16 on the Hot 100 charts and rally to the top of R&B streaming songs for three consecutive weeks in January. Now, the soulful crooner has manifested her godlike talents in a major partnership deal with Def Jam in collaboration with her own label, Supergiant Records.

Muni released a statement about the move that defined his career, telling fans, according to Complex:

“It has been a goal of my life to be able to bring my gifts to the world. This alignment with [chairman and CEO Tunji Balogun] and Def Jam for a global takeover is a literal dream come true. Supergiant Records started as an idea between me and my husband Raysean in 2019 and over the next two years we would invest, hire, strategize and create. As our team grew, so did our success, and through hours and hours of hard work and intense focus, we reaped a bountiful harvest this year.

It’s certainly long overdue for the Florida native. Muni Long emerged on the music scene in 2009 after releasing her debut studio album Jukebox. At that time, the singer was performing under her alias Priscilla Renea. Muni has spent over a decade writing songs for a number of music industry artists like Rihanna’s “California King Bed” and Fifth Harmony’s “Worth It”. In 2020, the Grammy-nominated star began garnering popularity by churning out viral tunes, including his infectious Yung Bleu-assisted track ‘Build A Bae’, which served as a follow-up to his critically acclaimed EP ‘Black Like This”.

During an interview with Billboard in January, the star recalled how she felt when “Hrs and Hrs” started gaining momentum on the internet. The song went spiraling past her friend and all american The Bre-Z actress featured the passionate tune in the background of a TikTok video tribute honoring her fiancé Chris Amore. Long reposted the adorable clip, and within days the video garnered over four million views. Initially, the star received an outpouring of support from the LGBTQ community.

“It became a thing where a lot of lesbian and non-binary couples would make their videos and send them to me, so I started posting them. It turned into cis[gender] couples, then it became a dance challenge, then it became #HrsandHrsKaraoke. I was like, ‘OK, it’s not going to stop,’” she explained.

Long said she and the team “capitalized on the momentum” and interacted with fans as they created their own romance videos with the R&B hit. It was a move that undoubtedly opened a new level for the moving artist.

“I felt like I was driving Uber in a Lamborghini – I could never go fast or in the direction I wanted to go, so I felt like I wasn’t being used to my full capacity,” Long added. . “Now it’s about freedom for me. No limits.

RELATED CONTENT: Muni Long Talks ‘VSOP’ by K. Michelle initially being her song; K. Michelle’s sister had something to say